Here are some of the articles I’ve written. See more on the homepage.

DANNY ELFMAN TELLS THE STORY BEHIND 8 OF HIS CLASSIC SCORES (Vulture)
“It’s hard not to notice children’s choirs on several Elfman tracks. Normally that sound would be reassuring, but in Elfman’s hands, it’s otherworldly and unsettling. You never feel very grounded when the chorus chimes in, as if they’re singing a gorgeous warning. The children’s choir particularly characterizes Edward Scissorhands.” Read more

WHAT’S TRENDING IN CAKEWORLD (Diary of a Social Gal)
“Modern historians may eventually refer to the last few years as #GlutenGate, when baked goods were seen as a guilty-as-charged pleasure, punishable by other people’s running app statuses. When cupcakes and cake pops elbowed their way into the party scene, coddling the ‘one can’t hurt’ crowd, we barely noticed that they were merely paving the return of the real thing: rich, riot-rousing cakes. Fake-protest if you like; we all know this ends with a big fat slice on your plate.” Read more

MONDO*ARC INTERVIEWS: ANNE BUREAU (Mondo*Arc)
“My benign, somewhat clichéd question is supposed to infer who she models herself after in her own field. It may even flatter whomever she namedrops. But for her, lighting design is broader than the discussions it can get boxed into, so the answer I’m expecting is a terribly moot point. Seeing the bigger picture is part of the reason she went off-brief when she lit the historic Dordogne River quays in Argentat, France, in 2004. ‘They wanted something dynamic and colour-changing,’ Bureau recalls, ‘but for me, it didn’t make sense to have that kind of scheme with those houses lining the docks.’ Instead, Bureau tapped into Argentat’s own history. Read more

MONDO*ARC INTERVIEWS: PETER FORDHAM (Mondo*Arc)
“Peter Fordham and I have something in common: our fathers were both jewellers, and they were also seduced by the lure of showbiz before settling on jewellery. While mine was a guitar-playing, free-living hippie with aspirations of becoming the next Jimi Hendrix, Fordham’s went from being a film extra to operating a lighting Strand console for a theatre production of The King and I in the 1950s. By sheer coincidence, the same kind of Strand lighting console decorates the London office of DHA Design, where Fordham is Director. ‘When I once brought my father to our office, he couldn’t believe that they still existed,’ he recounts. ‘Ours doesn’t work, but it’s quite a fabulous piece of history.'” Read more

WHAT MY COUSIN’S CANCER TAUGHT ME (The Montreal Gazette)
“‘Tell me honestly, Olivia, is she going to die?’ people would ask. And the honest answer was, I didn’t know. The second thing Sammy taught me is that cancer forces you to conjugate every verb in the conditional. There are so many maybes and so few certainties. If this expensive treatment works, she might live another few years. If her lymphoma doesn’t come back, she’ll live longer. If all the radiotherapy and chemotherapy don’t have terrible long-term side effects, she might even have a healthy life.” Read more

OLD CITY OF LIGHT (The Montreal Gazette)
“The lighting of the Notre-Dame Basilica’s façade is part of a deliberate urban landscaping initiative called Plan lumière, which started in 1999. The goal was to breathe new life into historic Old Montreal using strategic lighting design.” Read more OUR FIRST STOP IS ALWAYS A KARAOKE JOINT (The Montreal Gazette)
“That’s the thing about karaoke. In so many places throughout the world, the songbook will reliably be filled with international, barrier-breaking hits. We may not speak the same language, but we all know Hey Jude.” Read more 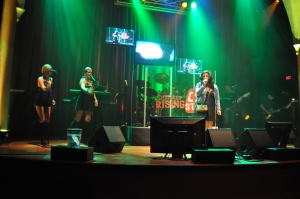 URBAN VILLAGES: MILE-EX’S MULTIPLE PERSONALITIES (The Montreal Gazette)
“It’s hard to get a handle on Mile-Ex. This peculiar 1.5-square-kilometre enclave is both old and new, both industrial and residential, not quite Mile-End or Park-Extension. Even its name is debatable. To many people who have been here longer than five years, it’s still Marconi-Alexandra, so named for two streets that cut through the sector. Those who have lived here longer than 15 years might consider it part of Little Italy. Some even call it WeLIta, for West Little Italy. Mile-Ex is a recent moniker that sits better with newer crowds, or with people who don’t live or work here at all.” Read more

URBAN VILLAGES: MADE IN VILLERAY (The Montreal Gazette)
“In the interviews I have done for the Urban Villages series, I make a point of asking this one question: Why did you choose this place instead of another place? In Villeray, the top five reasons are: the Jean-Talon market; Jarry Park; five métro stations; reasonably priced rent for well maintained, often large spaces (both commercial and residential); and a pleasant quality of life. The question I’ve tried to answer in every story in the series is: Why is this place emerging? In the case of Villeray, fashion is one of the elements propelling the area forward.” Read more

URBAN VILLAGES: SNOWDON MEETS YOU HALFWAY (The Montreal Gazette)
“Though Snowdon’s tranquility might feel like a departure from the bustling city core, there’s still a lot of activity here because of commercial roads like Queen Mary, Décarie and Victoria, from St-Kevin Ave. on. Plus, the types of businesses are assorted; you’ll find grocers big and small, health food stores, many pharmacies, clothing boutiques and loads of restaurants, many of them serving up authentic ethnic flavours.” Read more

FRIENDSHIP STARTED WITH A SIMPLE TWEET (The Montreal Gazette)
“The strangest part about Roger Ebert dying is the fact that I won’t be able to send him an email anymore. Much less get one of his responses, usually leading up to a punchline. We’re not always surprised when someone dies, but we’re certainly never prepared for them not being at the other end anymore.” Read more 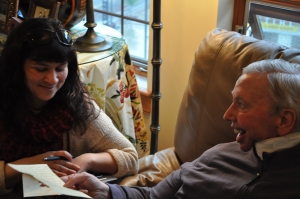 URBAN VILLAGES: HOCHELAGA-MAISONNEUVE, FRIENDLY WITH SMALL-TOWN FEEL (The Montreal Gazette)
“’HoMa,’ as some call it now, is slowly evolving past that image, but it’s not completely transformed. Some of its small businesses look a little worn, which happens when you’ve been around for 20 years or more. Still, they’re meeting a fairly high demand. Local fast-food joints like La Pataterie and cozy diner Gerry’s Delicatessen serve comfort classics like hamburgers, poutine and smoked meat sandwiches, and they’re as popular now as they were when they opened decades ago. A place like Bar Davidson, a dive bar known for inexpensive drinks, has been around since the 1930s. Back then, it was a tavern and wouldn’t serve women. Now it refuses no one. Not the student looking for cheap beer; not the leather-covered biker dude; not the scantily clad lady.” Read more

URBAN VILLAGES: ST-HENRI ECCENTRIC, ARTSY (The Montreal Gazette)
“St-Henri is the Un-Plateau. It’s quiet, it doesn’t have much of a nightlife, it borders the water, it has the Atwater Market. It does have a cachet that is Plateau-like in certain residential areas, but the neighbourhood tends to be more industrial thanks to its old factories, remnants of the many manufacturers once headquartered here.” Read more

URBAN VILLAGES: OLD MONTREAL – CHIC & CENTRAL (The Montreal Gazette)
“Today, Old Montreal couldn’t be more different. There are almost too many restaurants to choose from, new bars and clubs are 5 à 7-ready, and quite a few designer boutiques have set up shop along ‘Gallery Alley,’ St. Paul’s nickname for the many art galleries that once dominated the street. More importantly, the area is attracting more Montrealers than visitors.” Read more

URBAN VILLAGES: THE VILLAGE, BEYOND PARTYING (The Montreal Gazette)
“’There weren’t that many places in the Village where you could enjoy fine dining,’ says Bernard Beauchemin, a consultant for Bistro 1272, which focuses on progressive cuisine. Lallouz kebabery owner Zohar Bardai agrees, adding: ‘People in this neighbourhood … are willing to try new ethnic foods and appreciate it for what it is.’” Read more 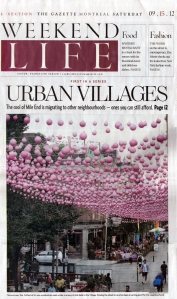 URBAN VILLAGES: TWO KINDS OF GENTRIFICATION (The Montreal Gazette)
“When people notice gentrification, it’s often after it’s already happened. That’s because it progresses in a few phases, and since the first doesn’t have anything to do with money, it isn’t as obvious.” Read more

RADIO EVERYWHERE: HOW RADIO SURVIVED THE DIGITAL REVOLUTION (sparksheet.com)
“Radio is in the midst of an exciting renaissance – and all renaissance movements are marked by versatility and big ideas.” Read more

FIVE GREAT MOMENTS OF DRAMATIC IRONY IN MAD MEN (indiewire.com/pressplay)
Before postmodernist self-reference, there was dramatic irony: a little wink from the writer that acknowledges the audience. It’s not just that we know something the characters don’t. It’s that the writer knows we know. Read more

A RENDEZVOUS WITH THE BEST OF QUEBEC CINEMA (spectator.co.uk/arts-and-culture)
“That’s Quebec cinema in a nutshell: inventive despite its paltry petty cash. It’s also a collision of forces: French and English; auteur and mainstream; Denys Arcand and everyone else.”

SHORT FILM: UMBRA (spectator.co.uk/arts-and-culture)
“Despite his surreal landscapes, Sutherland’s themes remain relatable. Well, as relatable as travelling through the galaxy in a spaceship shaped like a Mayan god can be.”

VILLAGE LIFE (urbanexpressions.ca)
“As Montreal’s unofficial party central, the Gay Village hasn’t always been known for great eateries and a charming neighbourhood life. But it’s getting there.” Read more 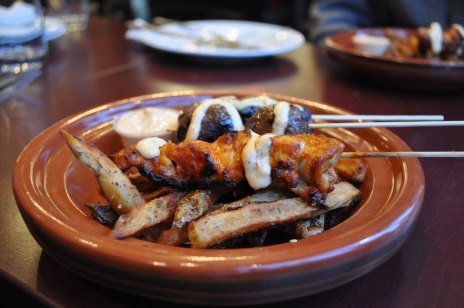 SPEAKING THROUGH THE WEB: Q & A WITH ROGER EBERT, PART 1 (sparksheet.com)
“I’ve never watched an in-flight movie. I take a novel, magazines and newspapers.” Read more

SPEAKING THROUGH THE WEB: Q & A WITH ROGER EBERT, PART 2 (sparksheet.com)
“Branding for me is like the practice of calling a city a ‘market.’ I write, people read.” Read more 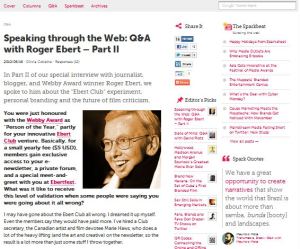 THE SIMPLE LIFE (enRoute.aircanada.com)
“The log cabin was built in 1998, the labour of love of professional adventurer John Langford. It’s entirely constructed out of red pine, a scent that seeps into every space. For added rustic authenticity, there’s also a gas stove and no electricity. But with palate-pleasing homemade meals and a constant fire heating up the place from the stone hearth, we’re hardly roughing it à la Susanna Moodie.” Read more

ENCORE, LAS VEGAS (enRoute.aircanada.com)
“With the Encore spa, designer Roger Thomas moves out of the minimalist Zen garden and into the ornate boudoir. In a city where more is more, the frill fits in nicely.” Read more

One thought on “Journalism”