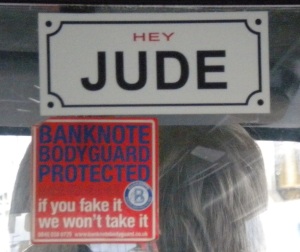 It’s impossible to visit a place like Liverpool and completely avoid the Beatles. Not that any of them live there anymore, but the little world that begat them still does.

On the thoroughly enjoyable Beatles taxi tour, our knowledgeable guide Kevin sometimes seemed embarassed to admit some of the trouble John Lennon got into. For a person who preached peace in his latter years, he sure was a little crap-disturber during part one.

Here are some of John Lennon’s most notable trespasses.

Before the Beatles, John Lennon formed a band called The Quarrymen, an allusion to the nearby quarry. I asked Kevin if our blue-collar hero had ever worked at the quarry. With his head down, Kevin humbly replied, “Sadly, no. Mr. Lennon wasn’t too keen on…labour.”

Who am I kidding? He’s still my favourite.