Roger Ebert published a rather fascinating piece arguing that video games cannot be art. Not surprisingly, there’s been a lot of backlash. Video gamers are a loyal bunch, but it’s not that they need to justify what they love by calling it art. They honestly feel that video game creators are artists. That’s why they let Blizzard take years to release any game, because like the developers, gamers want them to get it right. There’s an intricate creative process that goes into developing a video game (even a bad one). And it’s no different than spending a decade on a sculpture (even an ugly one).

Ebert was compelled to broach the topic when he saw a TED presentation by Kellee Santiago, a game designer and president of thatgamecompany. In it, she attempts to prove that video games are, in fact, an art form. I enjoyed Santiago’s spiel, but I felt she didn’t tackle the artistic elements of videogames. While she focused on engagement and emotional involvement, she didn’t deal with design or conception and how these create engagement in the first place. This seems like the most obvious argument for a game designer. She also kept bringing up critical acclaim as though it were synonymous with artistic street cred, which it isn’t. Taste doesn’t art make, as Ebert admits. Anyhow, I don’t feel she makes much of a case for the art of video games. So I’m going to try.

Medievalism: the root of most RPGs.

I want to preface this by mentioning that in the earlier part of my career, I was a journalist for a video game news website. Here, reviews are one of the major draws. Otherwise, what’s considered news is the announcement of a new game in development, and as many bits and pieces of that game as the studio behind it is willing to reveal. Those bits and pieces usually constitute concept art, in-game screenshots, and trailers. Why are these things important to gamers? Because it helps them assess what the gaming environment is going to be like, and that’s integral to their experience of the game. Sure, you could argue that most games have an objective; some sort of MacGuffin that has to be won or conquered. But to paraphrase Ebert: it’s not what the game is about, it’s how it is about it. The people responsible for the “how” of any game are the designers, the writers, and the many creators involved in taking you on a journey through the game. Really, the process of creating a game is no less artistic than what went into weaving the Bayeux Tapestry.

So what is art, then? Santiago cites the Wikipedia definition, which says that “Art is the process or product of deliberately arranging elements in a way to affect the senses or emotions.” Like Ebert, I’m not convinced this encompasses the totality or complexity of art; the description feels inadequate. But I find it touches on an important part of the experience of art. It’s about engagement, and video games engage people; that much is easily recognizable.

That’s one way to get people’s attention.

Do video games engage people in the same way as art? It depends on the medium we’re talking about. It’s only fair to compare video games to other media that lend themselves to similar experiences. Is playing a video game the same as looking at a sculpture? Not in the least. Is it a bit like reading a book? Certainly, if we’re talking about fiction. It requires the same process of suspending one’s disbelief to accept an alternate universe that’s different from the reality we know. The absorption of a book is similar to playing a video game in that it’s immersive, even if the adventure isn’t yours in the strictest sense. Otherwise, the visual dimension of video games can be compared to watching animation or a film: there’s a moving picture, and the construction of it is as deliberate as anything Stanley Kubrick might have done. I’m not comparing video game designers to Stanley Kubrick, but I’m sure many of them are inspired by his work and have used it to feed the vision of their output. And like Kubrick, game creators work hard to elicit a specific response from their audience. Which brings me to my next point.

Art requires an audience. Without an audience, there is no art. Art is one half of a relationship and a dialogue. It has to be presented to someone else as art, and, whether good or bad, it has to be acknowledged as such. Art doesn’t require taste, just one crucial social transaction.

While those who play World of Warcraft may or may not attend the next Picasso exhibit, they belong to an enormous demographic and are hugely devoted to the work of their favourite artists. This also means that they give video game creators jobs. And this addresses a strange cultural paradox: we seem to have a bone to pick with artists who make money. Game designers, much like art directors in an ad agency, are artists with jobs. They’re not struggling financially. They impact culture in an important way. They have a widespread audience, and it’s incredibly, immediately receptive to their work. Dissenters call it “selling out,” but video game creators prefer “raison d’être.”

Can any game be art? I’m not sure about that. People have brought up chess a lot, and my problem here is with the mathematics of the game. It’s functional and objective-driven. This doesn’t take away the enjoyment of it, but there’s no engagement with the imaginary, which is what’s so distinct about video games. There’s no “what if” fancy in chess. It doesn’t make it a lesser game, just an inappropriate comparison. 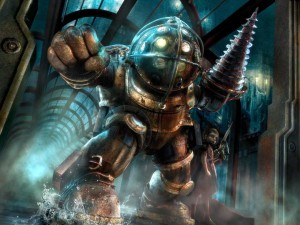 One of the terrifying BioShock bad dudes.

Art isn’t just a component of video games. It’s necessary to enhance the gameplay.  An example that’s commonly brought up to negate this is the first-person shooter (FPS). They’re often touted as mindless and one-dimensional, which is fair enough if you consider that the genre mostly involves one repeated action. But the “first-person” aspect is what gives the genre substance. Players need the art to believe the first-person gameplay. They also need a unique reason to choose one FPS over another (enter the Quake vs. Unreal debate). Games like BioShock demonstrate that it’s infinitely more interesting to shoot things in a setting that’s entirely alien, where surprise is just around corner. What impressed fans and critics about this game wasn’t just the graphics; it was also its Randian underwater environment and dystopian story.  This means a lot of effort when into conceiving this world, and that’s not the work of marketers or project managers. These are storytellers at play in an interactive digital medium.

One of the many Final Fantasy landscapes. Someone was hired just to design the trees in this forest.

Immersion is even more important in role-playing games, and it can’t happen without a bewildering universe. Just the other day, the husband unit finally bought his copy of Final Fantasy XIII.  I’ve never played games from this franchise myself (I prefer straightforward adventure games), but if you’ve followed the series, it’s perhaps the best testament to the genre’s evolution. When you consider its 8-bit beginnings, it’s all the more astonishing that the gameplay graphics are now on par with the in-game movie sequences. FFXIII also boasts a whole ecosystem that makes me wonder how the developers came up with their flora, fauna and technology. Their world is both plausible and impossible, at least for now. And isn’t that good science fiction?

Though it’s a little dated now, my favourite game is American McGee’s Alice. Most of its reviews were the same: awesome universe, great gameplay, but the end boss sucked. In other words, the journey was greater than the destination. Since the game’s release, American McGee and his work have garnered something of a cult following, starting with toy models from Alice, including the sickly Cheshire cat and the sadistic White Rabbit. McGee, for his part, knew the Wonderland and Looking Glass mythologies so intricately that his reconstruction was solid. And the characters? Flawlessly designed. 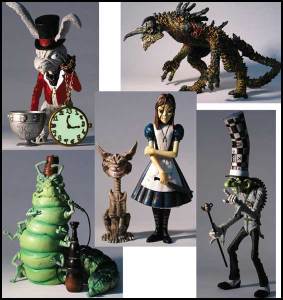 American McGee’s Alice merch, sold at a geek store near you.

Since Alice’s release in 2000, McGee relocated to Shanghai and set up a new studio, Spicy Horse. When asked to list the advantages of working overseas, he said the biggest bonus was a “blue sky mentality. Game development [in Shanghai] is a relatively new industry, and there’s less of a ‘history burden’ in terms of conceptualizing games, studio structure, and development process. People are more open to radical ideas.” Among other things, his answer alludes to the multidisciplinary nature of game development, which, in this respect, is not unlike moviemaking.

I’m also a fan of time-management games, and while these don’t make use of mind-boggling graphics, an art team is still involved. Sally’s Salon doesn’t look realistic, but it doesn’t have to, and that’s part of the fun. We accept that in animation, so surely we can make a concession for time-killers. There are also games that take no time whatsoever to go to market (the TV franchises, the board game simulators, etc.). But that exists in the movie industry as well. It’s the part of the business that’s just business, and that can’t be helped.

In terms of the craft itself, a meticulous creative process has often been directly linked to a game’s success. And why shouldn’t it? It takes time to create a world, especially one that works. I might argue that it takes more effort than penning the next Nic Cage action flick. But I don’t think this has to be about choosing film, poetry or painting over video games. I don’t think you can only prefer one if you discredit the other. Video game creators use different tools and speak to a different audience, but there’s room for that too in the art world. Or rather, there should be.

Is playing a game an art? No more and no less than watching a movie. But as long as we rely on art to enhance the gaming experience, we simply can’t separate the video game itself from the art that’s involved in making it. To deny the artistic process that goes into creating games is, I believe, short-sighted, if a little snooty.

My buddy Roger has gotten a lot of flak for his piece, and while it was to be expected, I think it’s undeserved. He hasn’t discouraged dissent, he’s taken the more scathing comments in stride, and he’s even linked to this Cracked article and this academic paper on the art of video games. It’s fine to disagree with someone, but it’s important to recognize when you get to do it in the context of a discussion. On that front, Ebert’s been a real good sport.