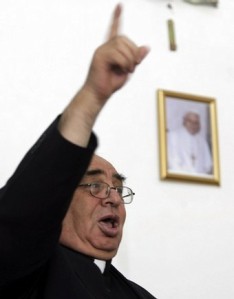 In the right hands, sermons can be brilliant essays.

As a young girl, I forced my then-godless mother to come with me to church. At age 7, I’d gotten baptized because the rest of the kids in my class were going to get their first communion, and I was left out of the activities. Like hell I was gonna sit in a faraway pew and watch my best friends Melanie and Marcelle wear pretty dresses as they rehearsed to receive their first host! So, I promptly got myself baptized, got a beautiful tartan dress for the first communion, and started attending church with Mumzie.

The nice thing about a Catholic service (compared to certain Protestant Sundays, which I would experience as a teenager out of curiosity) is that it only lasts an hour. Most of it is spent making gestures with your hands, kneeling, getting up, sitting, kneeling again, and giving the priests your memorized responses on cue. As a reward for enduring the first, unchanging half-hour, you’re then treated to the priest’s homily. The sermon portion of our program takes a good 15-20 minutes, and I usually don’t care for any of it. As a child, my eyes would wander around the room, looking for stories to make up about people, or just for other children secretly misbehaving. As an adolescent, when I attended Protestant churches, I took this time to exchange notes with my friend James. We spent one sermon debating whether or not Basic Instinct deserved an R or X rating. If his preacher-man dad only knew…

Obviously, I didn’t pay much attention to the content of the sermons. I did try, though, and while I was usually lost at about the 7-minute mark, I did grasp one constant that fascinated me. How do priests and ministers take an every-day issue (like, waiting in line at the grocery store to buy milk) and bring it back to god?

These days, I’m the one who’s godless, and my mother returned to the Catholic church (on her own, with no terminal disease to help her). Just the same, I can appreciate a well-constructed point, and that’s what a sermon is supposed to be. Granted, some do it better than others. One minister that I recall only had one answer for everything: god. Anything that didn’t fit into the god mould had to be of the devil, and that was about that. I didn’t care so much that I got bored of his sermons, though I was concerned about the people who believed any of it. They must live in a scary world.

The other night, I watched the movie Doubt, about a priest who’s suspected of molesting boys. The film begins with a sermon, and later on, the priest takes notes for his next homily, saying he gets ideas all the time, from all sorts of things. And I wondered how some of them do get their ideas. I also thought about how it can’t be easy to have to think of yet another way to tie everything to god, in a compelling way, for 15 or more minutes every week.

I don’t know what everybody’s process is, but my friend’s brother is a Presbyterian minister, and he took to the web. To develop the ideas for his sermons, he spends time blogging of vlogging about different issues that face modern  faith. Though he’s a Christian through and through, I find him progressive. He really wants to immerse Christianity in a thoughtful, intellectual dialogue. So he jams it out online. I particularly enjoy the way he wants to eliminate fear from faith, and other types of silliness that believers can sometimes all too easily adhere to.

Check out his blog, and this video, one of my favourites.