Let’s not kid ourselves: most of us aren’t exactly where we thought we’d be. It doesn’t mean we’re riddled with regret. It just means getting to do what you want is a privilege that you’ll earn if you’re willing to invest a lot of yourself (possibly more). Sure, some people get a lucky break, but I haven’t met anyone like that yet. As for me, I feel pretty fortunate that Plan B worked out, though that’s mostly because I worked it.

What was Plan A? What wasn’t. Maybe that’s why Plan B was a success.

So here’s a list of my Plan A shortlisters.

Throughout high school, the plan was always to graduate and study music in university. I followed through, but only for a year. The program was difficult and truly designed to weed out the ne’er-do-wells…in-music! Here’s the thing: at that level of music (or possibly any level), your options are quite limited. You can either be a performer, or you can teach. Not that I wasn’t a talented pianist, but I was one among many, and I’m not being modest in saying I wasn’t the best. Had I been a flutist, I might have had a better chance, and even then…So the other option was teaching, and that’s actually what I wanted to do when I went into the program to begin with. But once I got there, and maybe it’s that I was 18 years old and not ready to commit to any one career decision, I guess being a music prof didn’t feel right anymore.

What I miss about music is locking myself up in a room and practicing the piano 3 or 4 hours a day. I loved learning about music. I excelled at theory. I had some budding music history theories that I probably would have parleyed into PhD dissertations. I didn’t dislike the program, and I was actually an A student. I just felt limited by the career prospects.

If I could go back, I’d learn more instruments. More specifically: percussion, bass, and the cello. I wouldn’t mind learning a brass, like trumpet or trombone. But I probably wouldn’t remain in the music program.

Today, I wish I had more time to practice the piano. I also hang on to the dream of being in an all-girl punk band, where I will be the main songwriter, sometimes vocalist, and Farfisa organist. Our songs will be about why it’s so good to be bad girls.

After quitting the music program, I took a 2-year break. When I returned to school, I chose a program called “Film & Communications” in McGill’s English department. I was accepted and when I arrived, the program had changed. It became Cultural Studies, which is as ambiguous as it sounds. All the important filmmaking courses were gone. I did partake  in one workshop course that allowed me to make a movie, but I won’t let anyone watch it now (I won’t even watch it myself).

The process was laborious, intense, and I nearly unravelled. But nothing is more gratifying, for me, than to edit a movie.

If I could go back, I’d try to transfer to Concordia and make the cut into their filmmaking program (which is hard to get into; I tried many years after graduating). And I’d do it while I was still in my 20s, because that’s when you can afford to do foolish, impulsive things.

Today, I’m a sometimes member of Mainfilm, I own a Super 8 camera, a video camera, loads of different other cameras, and I have a few scripts on the go. I might not seem to be able to commit to any of these projects, but I hang on to the belief that I’ll be actively involved in filmmaking some day.

Okay, this isn’t really much of a Plan A since it never really made the list. My point is simply that when I was about 4 years old, I was enrolled in ballet classes. Apparently I wasn’t any good and I didn’t enjoy it much, so Mum pulled me out. Unfortunately, that sentiment didn’t last. From age 10 on, I’ve wanted to be a dancer. I still do. In fact, I keep trying to find a contemporary dance class for adults. I will do it, I tells ya! I will. I’d rather be a dancer than anything else, even knowing that my career would end in my late 30s and I’d be doomed to live my life as an instructor after that. 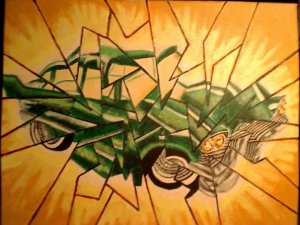 Again, this wasn’t really a contender for Plan A, but it is something I’d like to devote more of my time to. When I can, I love to take photos, paint, and do this collage-painting thing that I’ve coined “cross-comicking.” My art teacher Mr. Glenen encouraged me to at least try to get into a fine arts program in university. He even hung my self-portrait (the only profile anyone had ever done at that school, at the time; very challenging, as well, it took two mirrors to pull off) in the hallway for a year. I still love art. In fact, it’s probably “the one” more than any one person could ever be. It’s weird, really. We’re taught to exploit our talents and turn them into a career. But I can’t do that with art. I can’t explain it in a rational way: it’s something I do purely for me. In a way, music has become that as well. No one with a brain would refuse the opportunity to do any art for even just a bit of money, let alone a lot. But when I’m doing any art at all, a career is so far from my mind. Maybe that’s why I love it.

Granted, this was a childhood dream, so I’m not sure it should count. Still, I thought I should mention it because I still love fashion, even if I can’t sew for shit. I used to really enjoy playing Barbies (as many girls did). Oddly enough, I didn’t make mine get married and have kids. I made mine get jobs and share apartments with their friends. And my character, no matter if I picked a blond or the elusive (light) brunette, was invariably a fashion designer. I’d always find a Barbie-sized sash and wrap it around in an artful way to create a dress for my character. I also used to collect Katy Keene comics and I would always cut out her Paper Doll page. I think I even sent some designs to Archie Comics once for consideration (Ms. Keene’s schtick was that she wore clothes designed by the readers). In grade 6, I walked into Betty Rubin, a “designer” store in Moncton’s Champlain Mall. I told the saleslady that I wanted to be a fashion designer and how I’d love to be like Betty Rubin some day. So the saleslady immediately arranged a meeting with Betty herself, and her husband, who turns out to be the real designer of the pair. Both were very nice about it. Betty even asked me to return to the store and show her some of my designs. I did. I never heard back, but damn, what a lovely couple. So willing to humour a child, and to do it with such grace. 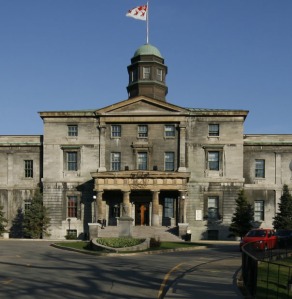 I really did enjoy university. I love learning. I’m a smarty-pants and proud of it. Earning my degree in English, and the process of doing it, is something I remember fondly. But I’ll be honest. I’ve had the chance to return and do my Master’s about 3 times, and each time, I quit on the very day school is about to start. I just can’t go through with it. I don’t know why just yet. Maybe if I figure it out, it’ll pave the way towards going back. But I figure if I’m not chasing it that badly, maybe I don’t really want it.

Do I have any regrets about not going through with Plan A? I would if I could keep up. Which is why I think Plan A was Plan C all along. And Plan B, writing, is probably more Plan A than any of the above shortlisters. It’s the only thing I’ve ever done seriously, whether as a career or creatively. It’s the constant. It’s also the thing I want to commit to the most. Come to think of it, that’s probably what a Plan A should be.